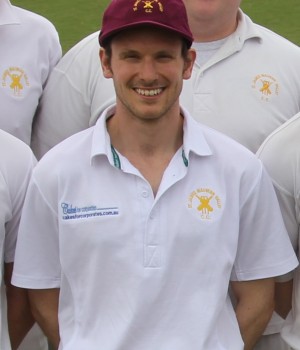 Football Team: Manchester United (but I guess it needs to be an AFL team…so the Saints or the Hawks!)

Coming off his notorious long run-up, Adam attempts to bowl at a lively pace. It has taken a few seasons to adjust to the synthetic wickets of suburban Melbourne, having grown up playing in the UK, but he assures us the off the pitch no-balls are becoming less frequent!

Also capable of handy contributions with the bat lower down the order, this is certainly an area of Adam’s game that the club is looking forward to seeing more consistently.

Adam has played cricket for as long as he can remember, starting with many hours spent trying to send stumps flying in the backyard with Dad. Since moving to Melbourne, Adam has thoroughly enjoyed playing his senior cricket with St James Malvern Valley CC.

The entirety of the 15/16 season was missed with injury, so Adam was thrilled to simply be back playing in 16/17. However, after missing out on winning a Premiership with the 2nd XI by just 12 runs in 2017 and again in 2019 with the 1st XI, the motivation has intensified and Adam is hoping that his 9th year with the club can bring a first Premiership flag in the ECA.